The greatest of all time (G.O.A.T.) acronym will be granted to one of the above three and it could be argued in favor of any one of them. And, after all, the G.O.A.T. designation is only an opinion. Muhammad Ali and Michael Jordan seem to have consolidated “goatness” in their respective sports.

The “goat” once applied to someone who erred, fumbled or otherwise caused his or her team to lose. Now, labeling an athlete the “goat” is the highest praise possible to give someone. Such is the strange nature of sports parlance!

Roger will be 41 in a couple of weeks and is not very active now. The Association of Tennis Professionals ranked him number one in the world for 310 weeks, which included 237 consecutive weeks, a tennis record of dominance.

This post will explore Roger’s fitness – his workouts, food choices and mentality. I will have videos and a tie-in to Amazon. Roger has always been my favorite tennis player, though I will stay away from conferring goatness to him as of now. Roger’s style of play seems unhurried. His timing is flawless and he hits incredible shots with ease. He expects to. 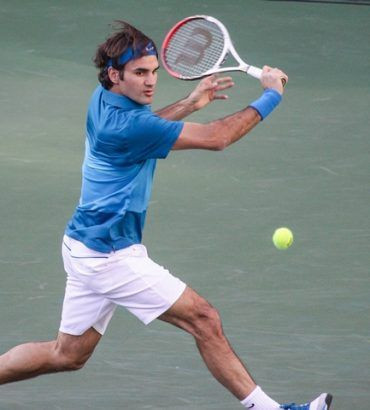 Roger does several basic exercises, such as:

Take a look at this you tube video of Roger’s footwork and fitness drills. He does something similar to a dead bug movement, jumps, sprints, does reflex drills, then movements with bands and medicine ball tosses on one leg. He does fast reps for his chest, back, upper legs and calves. Roger runs on a treadmill, sidesteps on a tennis court and does ball tossing with a partner that seems like juggling. Then he does a series of medicine ball movements, some push-ups and volleys against a wall (similar to a boxer doing speed bag drills). Finally, he practices trick shots against a wall as it snows.

During the video, it is very apparent that Roger is always keeping his knees flexed as he moves, which is one of the key footwork principles for anyone that aspires to be a tennis player. This is so ingrained in Roger that he doesn’t need to think about it. It is muscle memory. But that muscle memory had to be developed with many hours of practice.

Roger’s fitness drills are only important adjuncts to his tennis practice. My guess is that he spent many days in his evolution as a great tennis player by hitting thousands of balls in practice. No one becomes that good without putting in several hours of practice time daily. 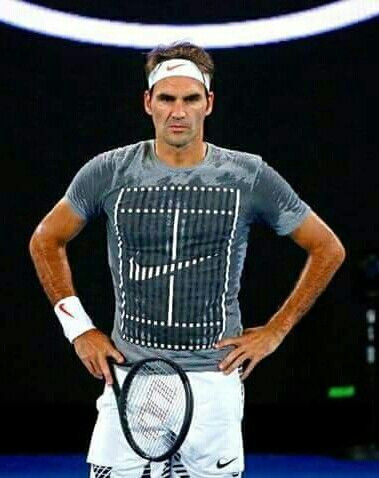 Roger likes to sleep 10 hours per night and often longer. He is aligned with Jeff Bezos in that regard. Jeff values sleep so much that he often takes a sleeping bag to work with him. There must be something to this – both men are uniquely successful!!

Home-made waffles, fresh fruit and a drink of either coffee or vinegar comprise a typical breakfast for Roger. He loves pasta two hours before a match. He also takes protein bars and bananas with him for a match. Roger is not strict about eating. He needs calories to get through tough five set matches.

Roger’s mental strength may be his most important asset. He is able to overcome nerves with focus on the task at hand. He isn’t able to eliminate negativity as he plays, but he seems to always rise above it.

Roger rides the waves of conflicting emotions as he plays and has the mental toughness to remain purposeful.

Here is a video that explains Roger’s mentality and how others may benefit from it.

PRIOR POSTS ON GREAT TENNIS PLAYERS

Here are a few fitness articles that I have done on other noted tennis players:

I have an affiliation with Amazon, whereby I can recommend products that are relevant to my written material. I may earn from qualifying purchases and can also point out specials.

Here are some Roger Federer – related items to check out:

As a former tennis player, I can relate to Roger’s journey, on a much less important and more modest level. I can recall constant drills – “Bend your knees, racquet back early, step in as you hit, watch the ball, move your feet, follow through”.

I was taught to take my racquet back as I ran to a ball – not to ever get to the ball and then take my racquet back. One drill to add length to my shots was to practice trying to hit balls about 2-3 feet past the other baseline. It was not easy to do since it was counter to the idea of keeping balls in play. But it worked. I was able to soon get back to hitting to within a foot or two inside that baseline.

Here is another tennis principle that I learned. It pertained to playing an opponent with one great ground stroke side and the other very weak. For example, he may have a great forehand and a weak backhand. I was taught to hit wide to his strength, so that he would need to run past his sideline to retrieve my shot. Then, the whole court would be open at his weak side and I could hit wide to his weakness. This worked much better than simply playing his weak side, in which case I would only be giving him practice on his weakness. This was also called the “wrong foot” strategy, since the opponent would anticipate a shot to his weakness and would usually need to quickly reverse his direction to get to an unexpected shot to his strength.

(Most of my tennis goods over the years have come from Dick”s Sporting Goods, another affiliation. Please check out the link at the side of my site).

My college coach was Jim Leighton, at Wake Forest University. He was a noted teacher of tennis and author of several tennis books. He taught precision tennis and would have used Roger Federer as an exemplar. Unfortunately, he died before Roger became known,

Roger Federer has made millions of dollars playing tennis. He also has run a foundation for the assistance of children in need. Take a look.

A quotation by Roger – “There is no way around hard work. Embrace it”.
I have enjoyed reminiscing about tennis and reporting on the great Roger Federer.

Please leave me any questions or comments in the “Comments” section below. Or email me, richard@myworkoutathome.com.

Be well and let’s keep promoting the great sport of tennis!