Dustin Johnson is ranked #1 among world – wide PGA golfers. He entered the PGA tour in 2008 and has won at least one tournament every year thereafter, except for 2014. At this point, he has a total of 23 tournament wins, including the U.S. Open in 2016 and the 2020 Tour Championship (and Fed Ex cup) earlier this month.

Dustin is 6’4″ and 190 pounds, 36 years old. He is fit and athletic. He always seems emotionally placid, whether he is having a great round or not. I did see him make a fist pump after a long, winding 43 foot putt on the final hole of the recent BMW Championship. This was as emotional as he gets on a golf course (externally). I have never seen him scream in disgust, throw a club or otherwise show a temper tantrum. He is cool, serene and professional.

Dustin is an athletic golfer, the ultimate long hitter. This is in the tradition of Tiger Woods and the late Arnold Palmer. Brooks Koepke, Bryson DeChambeau and Rory McIlroy are also in that category. Craig Stadler, John Daly and the late Ed (Porky) Oliver were successful golfers, but could not be considered great athletic models.

I enjoy researching and reporting on the personal fitness programs of exceptional athletes. See my prior post on “Luke Kuechly” here.

Dustin wants to prevent excessive rotation in his swing, to create stability in his spine and to maximize his club head speed. He does not care about bulging muscles or a bodybuilder’s physique. Dustin is tall, slender, wiry and strong.

“DJ” works hard. He is in his gym for 2 hours before his tee time, then he plays and stretches afterwards.

His program is generally to work one body part every day.

Here are a few of his favorite medicine ball exercises:

Those core stabilization movements are done with medicine balls of various sizes, depending upon strength levels and height. They are “golf specific”, but could improve anyone’s core strength

Here is a video of most of the above exercises. Dustin works under the guidance of his fitness coach, Joey D.(Diovisalvi)

Check here for another golf video by Joey D. 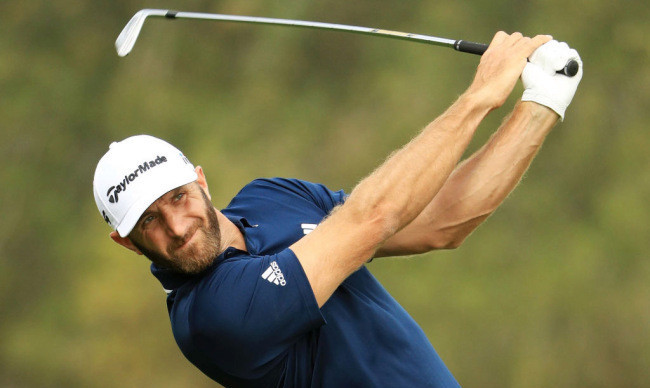 First of all, Dustin makes a strong effort to stay as hydrated as possible, given his time playing golf or practicing and his workouts. He drinks “a ton” of water and also likes sports drinks by Bodyarmour Lyte.

Here are a few of Dustin’s food choices:

Dustin uses Taylor Made clubs throughout his bag, including the above putter. For all golf equipment, clothing and accessories, I recommend Dick’s Sporting Goods, my preferred source. See below. Click on “Golf Deals” for plenty of options and feel free to check out any other category of interest.

Dustin Johnson has attained the status of undeniable golf superstardom. As such, he can afford a personal golf fitness instructor, Joey D. He also has a chef who often accompanies him on the tour.

But the initial process of developing his golf game and incorporating a fitness program was his alone. Most of the medicine ball routines and the movements suggested in Joey D.’s videos may be accomplished at home, especially in a garage.

Let’s give a lot of credit to Dustin for his ascendancy from a small college in South Carolina to the top of the golf world. He overcame some personal difficulties in 2014. He also had a 12-foot putt in 2015 to win his first major, the PGA. He not only missed the 12-foot putt to win, but also missed the next 4-foot putt to tie. DJ admittedly “choked”.

Such is the learning process for a professional golfer. Dustin has matured, and at this point he exudes the confidence of someone who can only get better each year.

Please leave me any comments or questions in the “Comments: section below. Or e-mail me, richard@myworkoutathome.com.

Please be well and stay safe!