MY IMPRESSIONS OF PHIL MICKELSON

I have been watching Phil play golf for what must be 30 years. It has been a genuine pleasure.

Phil and Tiger Woods have been dominant for most of this time, Phil being generally in a secondary status.

Both Phil and Tiger have at times been unsteady if not wild from the tee. They both have been able to save par or make birdies when they have missed fairways. Phil has been especially notable in his ability to extricate himself from trouble and perform somewhat magically with his wedge or putter. He even invented a shot where he could escape a sand trap with a large embankment facing him and the green behind him. Phil was able to blast the ball over his head backward to within a few feet of the pin.

Like Arnold Palmer, Phil has enjoyed a popularity approaching adoration on and off the golf course. He smiles, tips his cap and signs autographs. He appreciates his followers and lets them know this. He has even sought out youngsters in his galleries to ask for “advice” on how to make his next shot. He then makes the shot and thanks his “adviser”.

I have seen “Lefty” play in excellent physical shape and also when he seemed a bit bulky. He never seemed more fit than in his recent PGA championship victory – at age 50, almost 51. For this reason, I wanted to research his fitness practices and then pass this on to my readers. 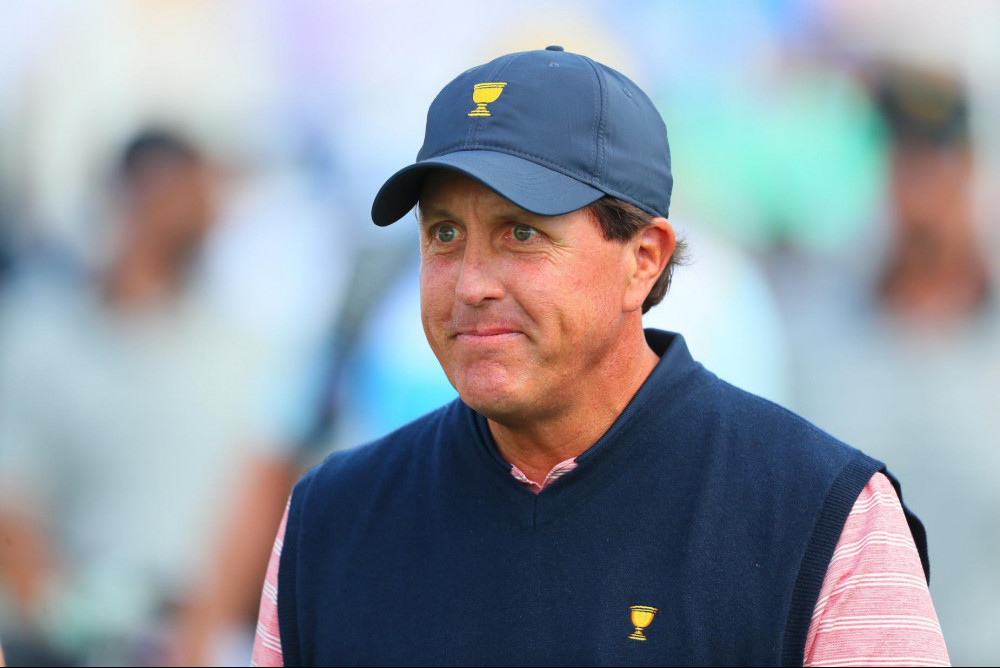 Phil was born on June 16, 1970, in San Diego, California. He is 6’3″ tall and generally weighs around 200 pounds. He attended Arizona State University on a golf scholarship. He turned pro in 1992.

Phil is actually right-handed. He learned golf initially by mirroring his father’s right-handed swing as a young boy

He married Amy McBride in 1996 and they have 3 children. Amy and Phil are shown below. 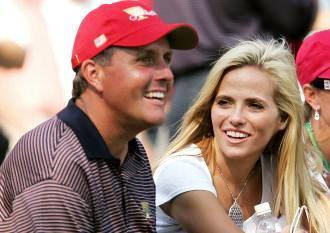 Phi has won 45 events on the PGA tour, which includes 6 majors, which are:

Like Sam Snead before him, Phil has not won the U.S. Open, at least not yet.

Phil has been in the top 50 golfers in the world for 25 consecutive years and in the top 10 for 700 consecutive weeks at a different time. He was inducted into the World Golf Hall of Fame in 2012.

Phil’s simple answer as to how he was able to defeat the world’s greatest golfers at age 50 was “I worked harder”.

He acknowledges that he lacked focus and was either unaware of or careless with the amount of sugar or other toxins that he was ingesting for much of his life. Phil decided to eat less of everything and to overall eat better.

Phil likes to fast for 36 hours every few months to reset his immune system. If he is playing, he likes to fast at the beginning of the week, thus 1.5 days fasting and 5.5 days of better (healthier) eating each week. He has learned that eating a lot less has enabled his body to recover. He has been able to avoid inflammation and to wake up feeling good.

He realizes that we can’t burn fat as easily as we age and that giving in to indulgences can add up to unwanted and unattractive pounds in our senior years. Phil feels that he doesn’t need to avoid his favorite foods or count calories, but that he needs to view food as fuel, to eat unprocessed foods and to give his body the time and activity level it needs to metabolize what he eats.

Take a look at before and after pictures of Phil, the “before” picture to the right when he was younger. Big difference! 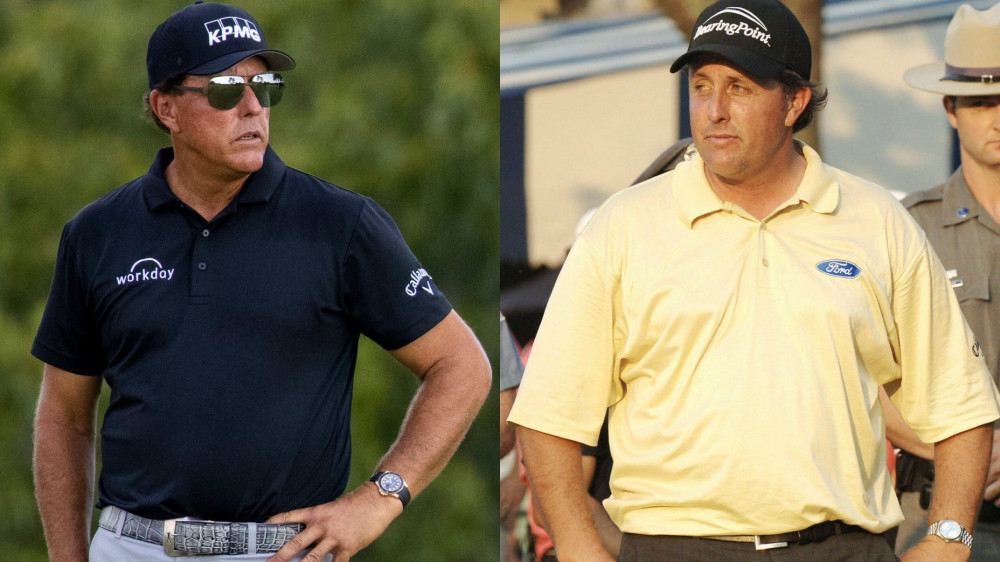 Phil believes in practicing with a stress level as similar to play conditions as he can create. For example, he has a putting drill where he makes himself hit 100 three – foot putts in a row. When he misses, he starts over.

Before a championship, he likes to play 36 – 45 holes per day, so that 18 holes will then not seem so daunting. During these practice holes, Phil focuses intensely on every shot, to simulate the upcoming actual rounds of play.

Phil believes in the value of meditation as a means to maintain focus. This may mean standing behind your ball before a shot and eliminating all distracting thoughts except that of an upcoming perfect golf shot.

(As an Amazon affiliate, I may earn from qualifying purchases). Here are a few items from Amazon for fans of Phil. Scroll around from the links for other options:

Here are other items for the health-minded:

Dick’s Sporting Goods has been my choice for golf clubs and accessories, as well as for all other sporting goods or sports clothing items for many years. See the link to their site and current discounts here

Phil Mickelson’s “secrets” to excellent fitness seem to me to be the following:

I don’t see specific kinds of food or workouts. It seems that he beats pro golfers half his age by better preparation and by incorporating stress levels into his practice sessions. Also, 36-45 holes of golf certainly sounds like a workout to me.

It definitely works for him and merits the attention of those who would hope to emulate his success.

His popularity, which entails great added financial success through endorsements, seems to come naturally for him. He enjoys his work. 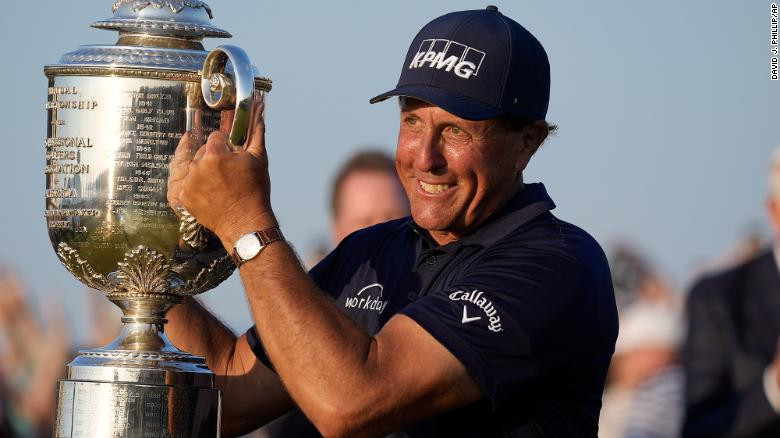