Both heavy resistance and light resistance are valuable. This is not an attempt to recommend one over the other; rather, an intention to discuss the qualities of both.

Heavy forms of resistance are better for building strength and power. This means using a weight that allows 4-6 reps. Heavier weights might also increase the likelihood of injury.

Working with heavy weights might be likened to preparing for a sprint or dash, while light weights may be thought of as warming up for a distance run. (This is only an analogy and not a suggestion for runners).

Muscles grow when they are compelled to do extra work. Gains are usually quite noticeable in the beginning couple of months. This is because muscles are adapting to unaccustomed workloads. Progress then levels off and more weight or different routines are needed for continued growth.

The story of Milo of Croton helps to illustrate the principle of muscle and strength growth by added resistance. Milo was a heralded Olympic wrestler in the mid 500s B.C. He was an Olympic wrestling champion 6 times. Greek mythology tells us that Milo began to carry a calf on his shoulders as a young boy. He carried the calf up a hill and continued doing so as the calf grew into a bull. Milo became stronger as the calf matured. Yet the growth of the calf was slow enough that Milo’s strength growth accommodated the added resistance. 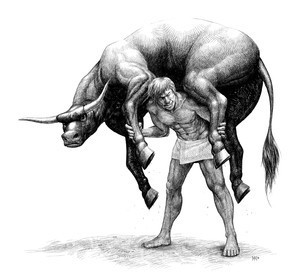 The human body has both fast – twitch and slow – twitch skeletal muscle fibers, generally in equal amounts. Both types activate force and motion. The differences relate precisely to our choices of weighted resistance.

Fast – twitch fibers become fatigued sooner. They have less myoglobin, the protein that binds oxygen. They are pale in color, pinkish white. They are used for short bursts of energy – heavier weight movements and sprints. They consume oxygen instantly. 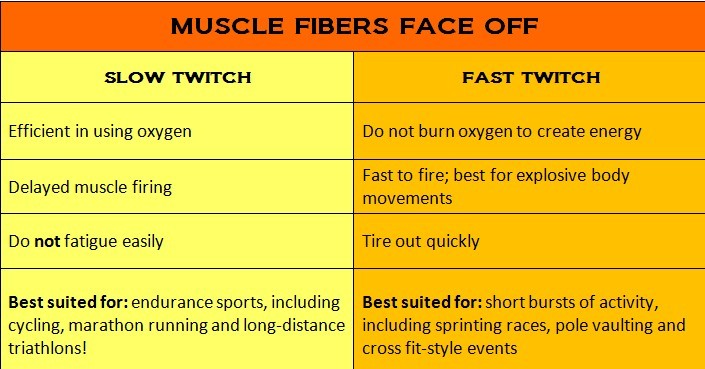 Because of genetic differences and the way we train, it is possible to become fast – twitch or slow – twitch dominant. This can become evident in our capabilities and preferences.

For training with weighted resistance, it is important to note that both fibers are activated for different purposes. Also, one type may “come to the rescue” of the other when energy wanes. Most people have an abundance of both.

Advanced bodybuilders are constantly seeking ways and means to get more value from their workouts. Here are a few methods:

Some of the above techniques are not for beginners; rather, they are for experienced trainers who are seeking advanced methods to engage their muscle fibers. Please realize that moderate weights and methods are sufficiently effective for reaching most of our goals.

If we wish to experiment with both heavy and light weights, it is imperative to be able to use equipment that provides these alternatives. My niche (workouts at home) emphasizes equipment that does not take up a large space, yet gives us an opportunity to become as strong and fit as we wish. This is generally equipment that may be closeted or otherwise moved after use. 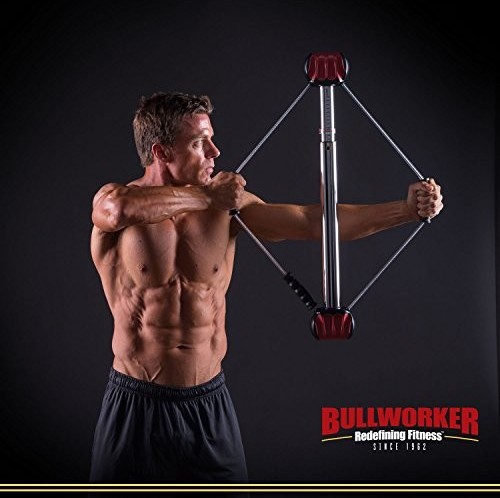 Please understand the differing benefits of light and heavy weights or other forms of resistance. It is important to be able to change from light to heavy and back as efficiently as we can.

We can do this with resistance cords by changing the cords that attach to the handles. 5 different levels of resistance are included in the set shown (from Amazon).

Changing weights of light dumbbells is simply a matter of selecting your choice of 3 pairs of dumbbells from the stand (from Amazon).

We can adjust the weight of heavier adjustable dumbbells by changing the plates on the two small bars, up to 52.5 pounds per dumbbell, (also from Amazon).

Bullworker products use weight provided by springs within the cylinders. There are 3 levels of resistance, easily changed. The cables may be spread, as shown above, or the handles may be compressed. (From the Bullworker company).

The traditional, time – honored method of using weights is to begin light to establish correct form. Then progress is made as we overload our muscles with weight increases. More weight is needed as performing 10 -12 reps becomes too easy. Be prepared to see very pleasing results more quickly than you may have foreseen. The drudgery of weight training is justified by a more attractive, healthier body.

Please leave any comments or questions in the “Comments” box below. Or e-mail me, richard@myworkoutathome.com.