Don’t get me wrong. I loved to work out at gyms (or clubs or spas). There were plenty of exercise devices from which to choose. There was the opportunity for social interaction and the energy thereby derived . There was also the entertainment, though this was not advertised. Instructive entertainment. A glimpse into the proclivities of human nature. Here are 3 of my remembrances:

(1) This was only a couple of years ago. I was working out in my hometown. Nautilus – type machines were plentiful, but it was busy. I was waiting to have access to a particular machine. A gentleman was finishing up. He politely indicated to me that he would be finished soon. I noticed that he had his pin set in the weight stack at a very moderate level of resistance. I turned to get a sip of water, then came back as soon as he had left. I immediately noticed that he had set the pin at a level of weight that was twice the actual resistance that he had been using. For some reason, he wanted me to think that he was twice as strong as he really was! The lesson is: nobody cares! Don’t try to impress others when you work out, particularly in a false manner.

(2) About 25 years ago, I was in Columbia, SC on business. That evening, I asked a co-worker if he would like to go for a workout. He agreed to, but somewhat reluctantly. It must be said that my co-worker was not a man of undersized ego. We walked in. My friend stopped in his tracks as he noticed several very strong men handling heavy weights. After a while, he told me that he had a headache and would like to leave. Clearly, he was intimidated. The lesson is: working out is not a competition. Weight training is not a power lifting contest. Work out to fit your needs without regard to what others are doing.

(3) Saving the best for last, this was about 30-35 years ago. I was at a gym in Greensboro, NC, where I was in regular attendance. I had finished my upper body workout and was on a stationary bicycle. It was easy to observe all the activity from my position. It struck me that the young ladies coming in were wearing significant make-up and dressed in fetchingly attractive apparel. Only to sweat. Even more interesting were some of the men. Whenever one of the ladies was in their line of sight, they would immediately go into a “lat spread” or otherwise flexed pose. They seemed to want to do this nonchalantly, but it came over as quite robotic. The funny part was their relaxation after the lady passed by, also in attempted nonchalance. The effect was that of a big balloon releasing air. The lesson is: grow up! 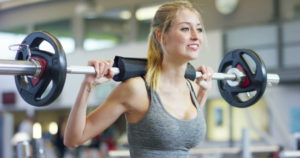 It so happened that one of the ladies working out at this location was the then current Playboy Playmate of the Year. Her name was Donna. Suffice it to say that she never seemed to suffer from a lack of willing assistance from male instructors, authorized or otherwise. The lesson is: beautiful and shapely ladies work out to stay that way.